Hundreds of Belizians and international supporters, including reef scientists and actress Daryl Hannah, gathered on an island on the Barrier Reef off the coast of Belize City on November 13, 2010 to form a human banner calling for humanity to be in harmony with our natural world. The action was on the final day of the three-day Belize Reef Summit where the 2010 Belize Reef Report Card was released. The Report Card, which highlighted the health of the Mesoamerican reef ecosystem, found that 60% of the reef is in poor to critical condition, while only 8% is considered good – staggering statistics that call for action now.

Ripple was hired to publicize these stunning aerial photograph (see above and below). The image was syndicated by The Associated Press and UPI and ran in countless outlets all over the world. 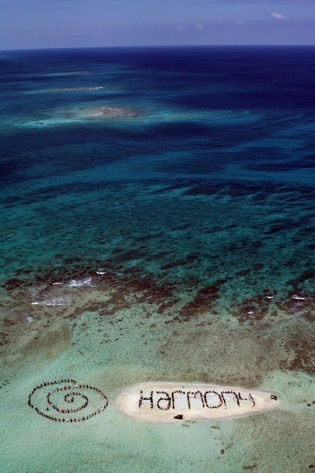